Truck underride rules may be expanded by NHTSA. The agency may soon require underride guards on the backs of trucks to save lives in rear-end collisions. 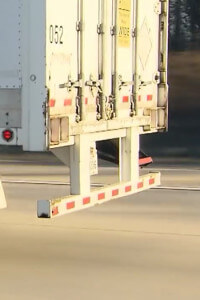 Semi-trailers already have underride guards. Single unit trucks, such as dump trucks, are not required to have them. Adding the guards would stop a passenger vehicle’s roof from being sheered off.

Hear Dan Clark talk with David Zuby of the Insurance Institute For Highway Safety, an advocate for better truck underride standards. A link to their website is in the transcript, below.

(:04)
Dan Clark: Cars crash into the backs of trucks. Because trucks sit so high, the roof of the car is often sheared off. These are called UNDERRIDES, and the US may be finally catching up to prevent them.

Hello, I’m Dan Clark of The Safety Brief, tackling health and safety hazards in today’s demanding industrial and construction worksites, a service of Creative Safety Supply. Get to creativesafetysupply.com, use coupon code BIG10. It saves you 10%.

(:33)
It’s taken a while but the US government is looking at mandating the rear impact guards to prevent underrides on single unit trucks. Those are dump trucks, garbage trucks, any big truck that doesn’t pull a trailer. Trucking industry groups and insurance carriers have petitioned NHTSA, the National Highway Transportation Safety Administration, for a new rule to prevent underrides.

David Zuby: Well, I think that the government will ultimately issue a rule requiring guards on more trucks.

Dan: Canada already implemented this standard in 2007. Surprise, surprise, our government will take its sweet time to issue a decision. There’s a window of 60 days to comment. Then what?

Dan: Is there a chance they won’t issue a rule?

(1:29)
David: In the past the agency has issued and Advanced Notice Of Proposed Rulemaking and subsequently decided not to issue a regulation. We hope that doesn’t occur in this case because we think that there’s a lot of evidence to suggest that the underrides that are required can be better and that more trucks could be fit with them without inhibiting their use.

(1:52)
Dan: Remember, this potential rule is for single unit trucks. Rear impact guards are already required on semi trailers. Maybe you’ve seen them. The guard hangs down at car bumper level, about 16 inches from the ground. If a passenger vehicle rear-ends the truck, the vehicle is stopped before the windshield impacts. It stops before the roof is sliced off.

I asked David Zuby “Will this be for new trucks only or will NHTSA require retrofitting of old trucks?”

(2:19)
David: It’s hard to say. As I understand it, the agency does have authority to require retrofits for commercial vehicles, but, if the past is any indication, likely they would require them only for new built trucks.

Dan: So, like many things in life, we’ll just have to wait. Thanks to David Zuby, Chief Research Officer and Executive Vice President of the Insurance Institute For Highway Safety.

(2:43)
That’s all for this episode, Truck Underride Protection Coming? Come back for more ways to stay safety compliant in today’s ever-changing landscape of safety requirements. I’m Dan Clark of The Safety Brief, a service of Creative Safety Supply. Save 10% off your entire order at creativesafetysupply.com with coupon code BIG10.