Table saw safety needs to improve. Thousands of fingers are lost every year in table saw accidents. Better finger saving technology is available, and saw makers should use it.

Hear about SawStop, the system that stops a saw blade cold on contact with a body part. It was developed over a decade ago, but saw manufacturers have ignored it.

In this podcast, Dan Clark tells how SawStop works, and why the big tool makers should quit dragging their feet and adopt it. 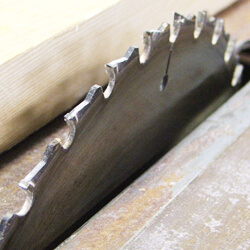 Dan Clark: Table saws spin at thousands of times per minute…and they’re trimming 4000 fingers a year…and there’s technology out there that would save save most of those fingers. Will the saw companies finally adopted it?

Hi there, I’m Dan Clark of The Safety Brief. This is where we talk about health and safety hazards in today’s demanding industrial and construction worksites.

A new table saw technology was introduced in 2004, but the big tool manufacturers are not using it. So, saw operators are losing fingers, as they always have.

(:36)
More about that technology in a moment, but first, let’s look where we’ve been in traditional saw safety.

• Most table saws have guards that fit around the blade to protect workers.
• Sometimes this guard gets in the way of a cut, so workers take it off. Danger!
• It’s also possible to reach around some guards and still get injured.
• Guards are an important safeguard, but they don’t prevent all injuries.

HOW DOES IT WORK? Well, it’s a low-level electrical current always sent through the blade. When the hand or finger comes in contact with that blade, some of the current is absorbed by the body. A sensor recognizes the change in current and quickly engages the brake. The blade then drops beneath the saw table and the motor shuts off.

When this happens, a new brake cartridge and new blade have to be installed before the saw can be used again.

So, imagine that. The technology is out there. SawStop inventor Stephen Gass designed the system over a decade ago. He tried to license it to saw manufacturers, but they have had little interest. Stephen said “Okay, I’ll do it myself.” He created the company, SawStop, but, sadly, they’ve had a very small share of the table saw market. That’s because of the expense.

(2:17)
But owners and managers should also recognize the other costs. Table saw injury expenses climb into the tens of thousands of dollars, especially when you consider direct medical cost and the indirect cost, such as time away from work.   Consider those when you check out SawStop.com. And this is not a paid endorsement, it’s a common sense endorsement.

In fact, here’s an editorial statement from me on The Safety Brief: Saw manufacturers, get with it. License this finger-saving technology. SawStop has been available since 2004. Imagine. 11 years, saving 4000 fingers per year…you have good accountants. I’m sure they can do that math.

(2:59)
That’s all for this episode on Table Saw Safety. Come back for more ways to stay safety compliant in today’s ever-changing landscape of safety requirements. I’m Dan Clark of The Safety Brief, a service of Creative Safety Supply. Save 10% off your entire order at creativesafetysupply.com with coupon code SAFETYBRIEF.