Hot work, such as welding, by storage tanks is obviously dangerous. But even tanks which are seemingly empty or contain normally non-flammable substances are risks for explosions.

In this podcast, Dan Clark tells the story of how a storage container of just water and fish residue caused an explosion and worker death during hot work.

Tanks should be continuously monitored for combustible gas, as the danger of flammable gases often increases from early morning to midday when tanks are heated by the sun.

Dan also relays other recommendations from the US Chemical Safety Board and OSHA on preparing for welding, grinding, cutting and other hot work by storage tanks.

Hi there, I’m Dan Clark of The Safety Brief. This is where we talk about health and safety hazards in today’s demanding industrial and construction worksites.

(:40)
Storage tanks sometimes spew unseen, flammable gases. Here’s an example. At a company in Mississippi, a nearly empty tank containing only 8 inches of water and fish parts led to a hot work explosion. One worker died. I’m not sure anyone on the crew that day thought the tank with a slurry of H2O and decomposing fish would generate flammable gases. But it did, in July 2014. No worker or manager thought it would give off methane and hydrogen sulfide, so no combustible gas testing was done in advance.

(1:15)
The CSB—US Chemical Safety Board—points out that between 1990 and 2010, hot work accidents near storage containers caused more than 60 worker deaths.

The CSB and OSHA recommend: 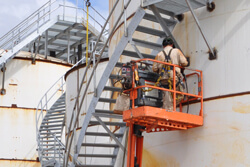 • Continuously monitoring the atmosphere for hazardous gases. As the temp rises during the day, gases might become more prevalent.

• Identify all possible flammables. Consider all tanks in the area, not just the one you’re working on.

• Eliminate hazards. If you’re doing hot work on a storage tank, empty it and air it out prior to performing the work, and then test it.

(1:51)
• Be prepared for fires. Have the fire extinguisher on site with a worker designated as the fire watcher to quickly respond.

• Use alternative work methods when hazards can’t be isolated. Cold cutting and hydraulic cutting maybe great options for you. 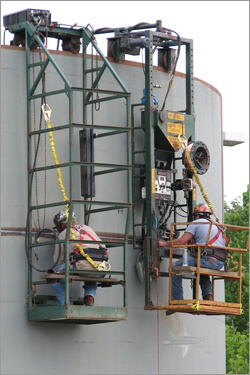 Don’t forget, hot work poses obvious dangers such as eye hazards and the potential for burns. But flammable gases and vapors can cause some of the most catastrophic accidents. So take steps to make sure that hot work is as safe as possible around these often overlooked hazards.

(2:25)
That’s it for this episode on Hot Work By Storage Tanks. Come back for more ways to stay safety compliant in today’s ever-changing landscape of safety requirements. I’m Dan Clark of The Safety Brief, a service of Creative Safety Supply. creativesafetysupply.com

Video from US Chemical Safety Board