Self-driving trucks? An 18-wheel big rig now drives itself on the highways of Nevada. Hear from someone who’s been in the passenger seat.

The Daimler / Freightliner Inspiration is world’s first licensed, autonomous (self-driving) truck. Freelance automotive writer Jeffrey Jablansky rode in the truck at its debut, and Dan Clark asks all about it.

Jeff describes the butterflies he felt during the ride, and if he felt the truck was safe. He also tells of the navigation and satellite systems which guided the truck at 70 mph.

Dan and Jeff discuss the legal hurdles self-driving trucks face state-to-state, their expected cost, and if they will eliminate jobs.

Jeffrey Jablansky: It’s certainly unnerving to watch a truck, that they told us had a gross weight of 65,000 pounds if it was full, all of a sudden starting to drive itself.

Dan Clark: The road-legal, self-driving truck rolled out this month. We’ll hear from a man who was in the shotgun seat.

(:32)
Hey, lean in. Do me a favor. Make your order at creativesafetysupply.com and use coupon code BIG10. It saves you 10% and lets them know I sent you. 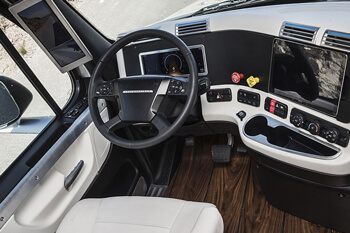 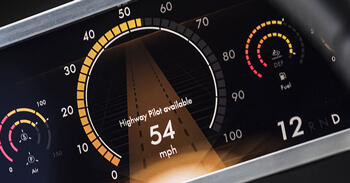 (1:03)
Jeff: The second we pulled out of a parking lot, Highway Pilot came on, and the driver took his hands off the steering wheel.

Dan: It’s the first licensed, self-driving 18 wheeler. Does a driver need to be at the wheel?

Jeff: There has to be a driver in the seat, and the driver can’t walk around. It’s kind of up in the air what the driver can do while he’s sitting.

Dan: So, no sneaking back to nap on the couch?

Dan: And you had a talkative driver.

Jeff: The driver was able to explain a little bit about the physics. And while he talked, he was using his hands to talk to talk to us, as opposed to using it to control steering wheel.

Jeff: The truck uses a navigation system and satellite mapping to follow the roads. And it will determine whether the truck can steer itself through a corner, stay on the road without the use of the drivers hands.

Dan: Since this is The Safety Brief, did you feel safe?

Jeff: I’m glad that there was a trained operator at the wheel. Aside from not having a CDL, I’m not sure that I would have been able to trust the system as implicitly, but it was pretty amazing.

(2:09)
Dan: Daimler isn’t new to autonomous vehicles. Did that reassure you?

Jeff: Having tested this technology out in passenger cars, there’s a degree of safety that you do feel.

Dan: This truck is only legal in Nevada. Do you think other states will follow soon?

Jeff: Nevada has laws that specifically allow for testing of autonomous vehicles. However, there are quite a few that have no legislation on the books at all. So, I don’t think you going to see self-driving trucks making cross-country journeys quite yet.

(2:41)
Dan: Okay. Well, truck drivers everywhere want to know: how much will it cost?

Jeff: You know, I asked that exact question to four or five different people, pretty high up, and none of them would put a price on it?

Dan: What do you think it will cost?

Jeff: Conservative estimates say in the thousands of dollars, as opposed to, I guess, the tens of thousands.

Dan: Jeffrey, will this eventually be a job killer?

Dan: A driver has to be in the seat now, but could that change?

(3:08)
Jeff: This is not going to take all the truck drivers off the road, but it may take a few off the road. This comes down to whether autonomous trucks will be able to follow each other in a draft formation on a highway, in perhaps, a special lane. You may only need one driver with the cab, and then several trailers behind it. So, we may start seeing more road trains and fewer operators. But Daimler and Freightliner assured us that the logistics chain will still require as many people.

(3:38)
Dan: That’s Jeffrey Jablansky, who rode in Daimler / Freightliner’s new self-driving truck. Jeff is a freelance automotive writer. Check out his work in the New York Daily News, Auto World News and many other publications.

That’s all for this episode, 8 Questions About Self-Driving Trucks. Come back for more ways to stay safety compliant in today’s ever-changing landscape of safety requirements. I’m Dan Clark of The Safety Brief, a service of Creative Safety Supply. Save 10% off your entire order at creativesafetysupply.com with coupon code BIG10.